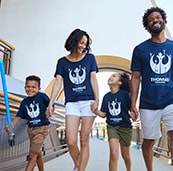 What kind of identification do I need to supply if I wish to enjoy an alcoholic beverage at the Disneyland Resort?

United States residents who wish to purchase an alcoholic beverage at the Disneyland Resort must present one of the following forms of identification:

Original passports are the only form of identification acceptable for Guests from outside the United States; non-United States driver’s licenses, ID cards, temporary ID cards and copies of ID cards are not acceptable.

Be the first to hear about the latest news and special offers at the Disneyland Resort.